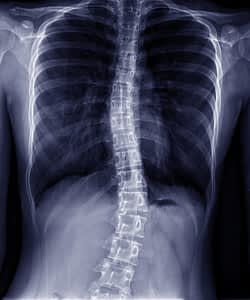 An estimated 3% of the American population is affected by scoliosis. Every year, thousands of patients visit a physician to be fitted with braces or undergo surgery. At IGEA Brain, Spine & Orthopedics, our physicians are experts in scoliosis correction surgery. We serve the tri-state area of New Jersey, New York, and Connecticut with high-quality, compassionate care at all of our facilities.

What Is Scoliosis Surgery?

Scoliosis is a deformation that affects the spine. Most common in adolescents, scoliosis causes the spine to curve from side to side, creating a C or S shape. In severe cases, the curves can be greater than 45 degrees. Curves like this are extreme, but fortunately, they are easily correctable with scoliosis surgery.

The procedure involves the insertion of hooks and screws into the spinal structure. These are then connected to a rod, which stabilizes the spine while the vertebrae are fused with a bone graft. By stabilizing and fusing the bones, the surgeon can stop the condition’s progression, reduce the deformity, and help the patient become more balanced.

What to Expect on Surgery Day

There are two main types of scoliosis surgery, characterized by their approach to the spine. Which is used depends on the shape and location of the curve. The two types include:

Posterior scoliosis surgery begins with an incision along the middle back of the spine. The surgeon can then take one of two approaches, depending on the severity of the condition:

The surgeon then removes some bone from the spine and places bone graft material that will encourage the vertebrae to fuse together and correct the deformity.

In some cases, the deformity is too severe for a posterior approach to fix. When this happens, the surgeon will first perform an anterior release to remove the spinal disc from the front and fuse the space closed with a bone graft. This can increase the likelihood of a later surgery’s success.

The anterior approach is most often used for curves where the middle back meets the lower back. The surgeon accesses the spine from the front through an incision in the left side of the body. They then remove the affected discs and replace them with bone graft material. A minimally invasive osteotomy may also be performed to further correct the deformity.

When to Seek Treatment

There are a few signs that a person might have scoliosis, including:

The condition typically appears at age 10, though it may begin during puberty or during a growth spurt in the teens. As a child grows, the condition will gradually worsen until the child is an adult or the condition is treated with surgery. If you or your child is living with scoliosis, IGEA Brain, Spine & Orthopedics is standing by to help patients across the tri-state area. To learn more or schedule an appointment, contact us today.