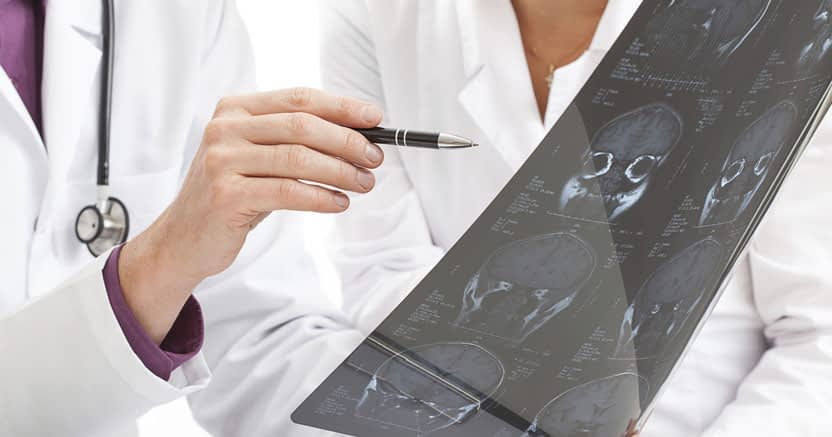 At IGEA Brain, Spine & Orthopedics, our neurosurgeons are the leaders in implementing deep brain stimulation therapy for those affected by Parkinson’s disease. Our team of specialists provide quality, comprehensive care and relief for patients who are afflicted with this condition.

Parkinson’s disease is a neurodegenerative disorder in which the deterioration of nerve cells in a part of the mid-brain called the substantia nigra causes a deficiency of dopamine levels.

Dopamine is a neurotransmitter that enables communication among the brain cells that control motor function. The death of the nerve cells that produce dopamine results in the motor symptoms associated with the disease.

Though there is no cure for Parkinson’s, many of the Parkinson’s medications are designed to mimic the effects of dopamine or temporarily replenish the levels of dopamine in the brain in order to increase motor productivity. While these medications do aid in reducing the severity of the symptoms of Parkinson’s, the progression of the disease will eventually come to a point in which symptoms will no longer be controllable through the use of medications.

What is DBS Therapy?

Deep brain stimulation (DBS) therapy is the most commonly used surgical option for Parkinson’s and is FDA-approved.

During the procedure, a battery-operated medical device known as a neurostimulator is surgically implanted into targeted areas of the brain that control normal movement. This device, similar to that of a heart pacemaker, delivers electrical stimulation through a flexible wire known as a lead and effectively blocking abnormal nerve signals that cause Parkinson’s tremors and other symptoms. Deep brain stimulation does not damage healthy brain tissue and is only used for those patients whose symptoms can no longer be controlled with medications.

For more information, contact one of our experienced professionals today.

Through DBS therapy, the major motor symptoms of Parkinson’s can be managed. These symptoms include:

• Tremors are categorized as an involuntary shaking of the hands, arms, legs, jaw or tongue, particularly while at rest. It may also include eye twitching as well as pill rolling which is the constant rubbing of the thumb and forefinger

• Rigidity refers to changes in muscle tone associated with resistance in the passive movement of limbs. Stiffness would be found in the arms, legs or trunk of the body, particularly after lying flat and still over the course of several hours

• Bradykinesia is an extreme slowness of reflexes and movements in the body, impairing the ability to adjust the body’s position naturally

• Akinesia is the loss of the power of voluntary movement

DBS therapy may improve your ability to conduct everyday tasks and maintain a fulfilling lifestyle.

IGEA Brain, Spine & Orthopedics offers a customized treatment plan to fit individual needs and help to manage even the most severe Parkinson’s symptoms. If you or a loved one is suffering from the effects of Parkinson’s, contact us today to learn more about what we can do for you.