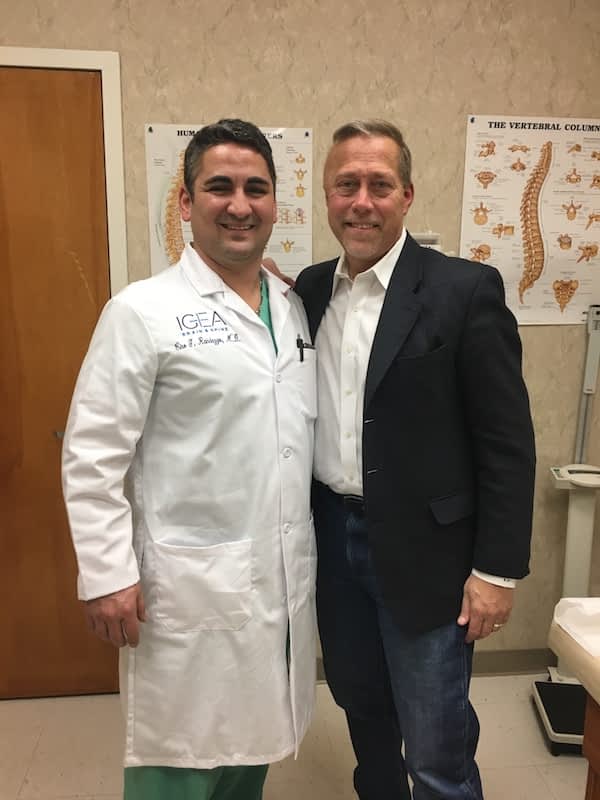 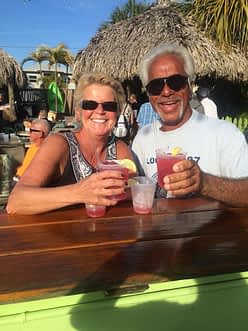 Severe headaches delivered Barry Cupoli into the hands of Dr. Adam Lipson of IGEA Brain & Spine. That happened when an emergency CT scan of Cupoli’s brain required an immediate trip for emergency surgery at Morristown Medical Center. As often happens when a major event causes life to freeze in place, Cupoli’s wife Carleen remembers the exact date: Monday, September 14, 2015. “I’d be lost without her,” Barry says lovingly of Carleen.

Dr. Adam Lipson was on call. He spoke to the couple, inquiring about symptoms, “Has Barry’s personality or behavior changed?” he asked. It turns out Lipson’s instincts about Cupoli’s symptoms, which Carleen confirmed, were the beginning of a diagnosis: stage 4 glioblastoma. Cancer is divided into stages, and stage 4 is the quickest-growing and most aggressive type.

“This is going to be the hardest conversation you will ever have,” Dr. Lipson admitted to the couple while in the hospital. 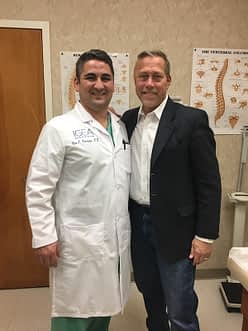 Is there a doctor in the house?

When the answer to that question is yes, it can make a world of difference. Such was the case for Robert Kinsey when his physician father-in-law Dr. Thomas Bellavia teamed up with Dr. Ciro Randazzo of IGEA Brain & Spine.

Kinsey recalls having painful morning headaches immediately following Labor Day in 2014. “They were horrible headaches,” he says. So painful in fact that he would take some over-the-counter medication and have to go back to bed for an hour. He’d wake up recovered and “go about (his) day like it was any other.”

This all changed on September 24, 2014. That’s when the then 54-year-old Millstone Township, New Jersey business consultant was convinced by his wife to accompany her to Hasbrouck Heights on a visit to her father—who is also their family physician. She wanted him to get a physical, particularly because of his headaches. Kinsey checked out fine, but due to the headaches, Dr. Bellavia wanted him to get an MRI for a closer look.

Two days later, he had his MRI. No sooner did he pay his co-pay, his phone started ringing. It was his father-in-law. “I’m coming to get you,” he told Kinsey.

That was the question Kinsey asked his father-in-law and undoubtedly himself... 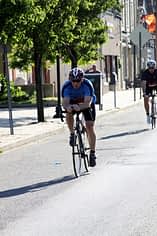 Although Mike’s heart proved to be fine, Dr. Lipson knew there was more to this... 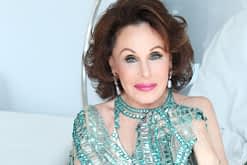 “If I can’t do it in high heels, I’m not interested!” That’s the signature quote of Nikki Haskell.

Haskell is renowned for her history of achievements, as well as that quote. In fact, it is the crowning line of her voluminous resume.

That resume catalogs Haskell’s fame and many of her accomplishments: one of the first women stockbrokers; a bestselling author; a talk show host; a major film producer – just to name a few. Since 1975, Haskell has conducted her business via regular commutes between her bicoastal bases in Los Angeles and New York.

But, for the past 12 years, she has pursued her career and those long plane rides while suffering unbearable back pain.

"For Roseann Zielinski, an anxiety attack turned out to be a good thing. In 2005, Zielinski was driving when she experienced her attack. She pulled her car over to the side of the road before passing out. An ambulance trip to the hospital and subsequent testing turned out to reveal something serious, despite the fact it had absolutely no connection to the anxiety attack or the fainting spell.

According to the Brain Aneurysm Foundation, an estimated six million people in the U.S. have an unruptured brain aneurysm. That translates to one in 50 Americans. As it turns out, Roseann Zielinski is one of them. That was her diagnosis following hospital testing." 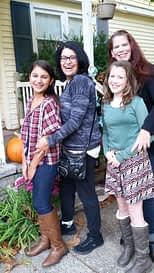 "For Carmela Cortes, it all began on December 7, 2012, with a routine check-up at her primary care doctor. Cortes, who had always been healthy, was informed that her blood pressure was high. She told the doctor it was probably just her jittery nerves since she and her husband were having difficulties and seeing a therapist.

Cortes was rushed to the hospital, where she and her family met the doctor who would save her life..."

"Dr. Lipson explained the surgical procedure to be done in detail and provided realistic outcome expectations and time guidelines. My surgical scar is cosmetically precise, an indication that precision and focus to detail is practiced from the first incision to the last stitch/staple. PA's Tanya Lugo and Eileen Muench are top tier professionals who monitored me in the hospital and through follow-up. A quality specialist team from beginning, and without end. Questions, follow-up, and any future needs are welcomed with sincere interest."

"Dear Ciro,
By the time you receive this thank you note, it will have been 3 years since my CVA. I wanted to take the time to personally thank you for the care and medical expertise that you afforded me. Treatment started on September 27, 2010 (the date of my stroke) until my discharge to the Bacharach Rehabilitation Center. You again treated me in February – March 2011 when you successfully placed a stent in my right carotid artery.

I was so very fortunate that you were my physician.

I owe my significant progress to the excellent care I received from all of the medical professionals that cared for me. I am still progressing and working hard.

In closing, I wish you health, happiness and prosperity, my friend.

Thank you very much.

"Dear Dr. Lipson,
Thank you and your wonderful staff for all your hard work and efforts these past two years. Between you and my GP, and my wonderful bride, I've had the sensation of fly fishing I haven't had since this whole thing began - over seven years ago."

"Dear Dr. Randazzo,
I am the grandmother of the 18-month old boy whose life you saved on the night of January 23rd in an emergency operation for Hydrocephalus.

I am so grateful to you for taking the call from his pediatrician and agreeing to do the surgery! There are no words to explain the gratitude I feel and how thankful I am that you were there for him that night.

You saved his life and I will forever be thankful to you. God bless you.

Thank you so much.

"Dr. Lipson literally saved my husband's life. I'm sure he doesn't get much in the way of "thank you's." Every single person we dealt with in his office handled my husband's condition with great care. We have referred friends to him and we are planning on an article about my husband's experiences."

"Thank you for saving my life on May 26, 2014. It's great to be home again and back with everyone I know and love. I feel great and there are no aftereffects. God bless you."

"I appreciate Dr. David Pouland and staff for excellent care. Dr. Pouland did for me anterior cervical fusion.Thanks for your kindness and concern, how you take the time to explain my conditions. Everything that l have to know before and after surgery. I appreciate Nicole Madison surgical coordinator, since my first visit she work and keep me informed all the way until surgery was scheduled. Excellent staff AAA+++++. Thank you."

"Dear Dr. Randazzo,How lucky we are to be writing you this thank you note. On December 11, 2013, our son, Tim, fell and fractured his skull. Thankfully, you went to ARMC in the very early morning hours (2 AM) to perform a craniotomy to relieve the pressure and stop the bleeding in Tim’s head. You can’t imagine the joy that has filled our hearts this year with having Tim in our lives. Please know that what you do every day matters to your patients and the families who love them. I know that your profession must be difficult for your family, but because you responded to the call on Dec. 11th, our son is still with us. Thank you for utilizing your expert surgical skills four times over the past 12 months on Tim.

With our sincerest heartfelt appreciation,"

"I truly appreciate the care I received from Dr. David Poulad at IGEA Brain & Spine. Most anytime I need to see him there is no problem to get in. The staff appreciate my needs as a person. Thank you very much Dr. Poulad and staff!"

"Dear Dr. Randazzo,You will always hold a very special place in our hearts. Thank you for helping Tim recover from his TBI this past year.

"Dear Dr. Randazzo,You will always hold a very special place in our hearts. Thank you for helping Tim recover from his TBI this past year.

"Excellent Staff, excellent care, you are not cattle you are a person who happens to be a patient and are treated as such. I wouldn't go anywhere else for this procedure."

"Service is always excellent. Very fast and respectful. All the staff is wonderful!

"Dr. Lipson is always smiling and happy in the pictures! So alive!!!  It's amazing the respect I have for him...thank you for saving my moms life!! I can enjoy her company thanks to you!"

"Dr. Lipson is the best. Makes you feel really comfortable and informed about my surgery."

"Thank you for giving me my life back. Vonita, incredibly kind and helpful. Nichole, prompt and kept me informed every step of the way, very appreciated. Eileen, very nice, knowledgeable, friendly, and explained thoroughly. Dr. Lipson, I cannot thank you enough. So thankful you added me into your schedule on a Saturday. You have made such a positive impact on my life. Thank you!"

"Thanks for all of your help and for saving so many lives, including my mom’s. I know you are a busy man but I hope you read this book as a blessing to your soul and life. I don’t know you, but I know you have a beautiful heart.My mom and I appreciate you. Thank you for everything,"

"Anthony immediately put me at ease and listened very carefully to my concerns. His testing and analysis of my situation was extremely thorough and he made sure I understood the results. I’m very pleased with his care."

"Dr. Anthony DeMarco was very professional and is a very kind doctor. He even called to see how my wife was doing. I want to thank him for being so kind!"

"Took the time to come up with a helpful plan. He was very thorough and patient."