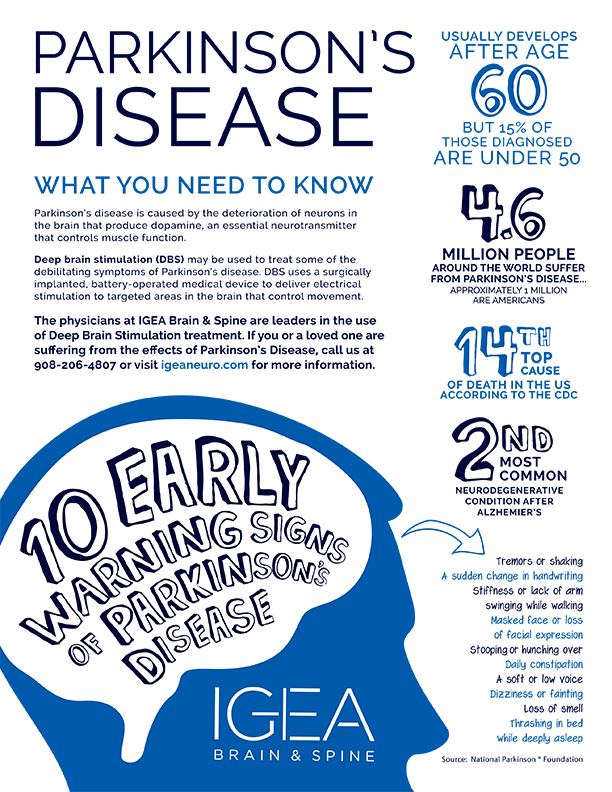 Parkinson’s disease is a widely recognized illness that affects 4.6 million people worldwide*. It is a neurodegenerative disorder in which the deterioration of nerve cells in a part of the mid-brain called the substantia nigra causes a deficiency of dopamine levels. Complications from Parkinson’s are the 14th top cause of death in the US*. It is also the second most common neurodegenerative disorder following Alzheimer’s*. 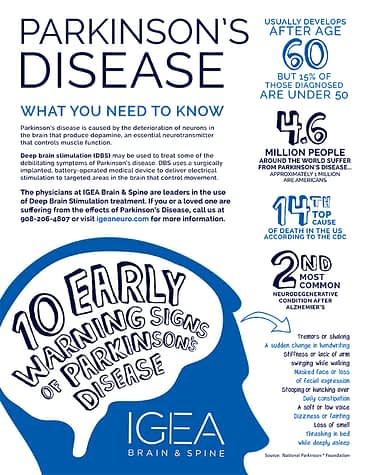 The average age of patients diagnosed with Parkinsons is 62 years old. Patients who are diagnosed under the age of 50 have what is known as Early Onset or Young Onset Parkinson’s. In those diagnosed within this subset, it has been shown that there is usually a slower progression of the disease and a lower occurrence of dementia.

Look for the Signs

When diagnosing Parkinson’s, a neurologist will check for the following four important primary motor symptoms. Presenting at least two of the four over a period of time is a clear indication of Parkinson’s disease.

Tremors are one of the early telltale symptoms of Parkinson’s. Tremors are categorized as an involuntary shaking of the hands, arms, legs, jaw or tongue, particularly while at rest. It may also include eye twitching as well as pill rolling which is the constant rubbing of the thumb and forefinger.

While tremors themselves are not necessarily indicative of Parkinson’s, coupled with any of the other three primary symptoms would lead to a Parkinson’s diagnosis.

Rigidity refers to changes in muscle tone associated with resistance in the passive movement of limbs. Stiffness would be found in the arms, legs or trunk of the body, particularly after lying flat and still over the course of several hours.

Bradykinesia is an extreme slowness of reflexes and movements in the body, impairing the ability to adjust the bodys position naturally.

Postural instability refers to difficulty in maintaining balance, often leading to dizziness and sudden falling, especially when pivoting. “Freezing” episodes may occur in which the feet feel as though they are glued to the floor, making the ability to take steps difficult. It should be noted that this symptom usually appears in the later stages of the disease and may not be present during an initial diagnosis.

There are also a few secondary symptoms that may aid in a Parkinson’s diagnosis.

Micrographia is a drastic change in handwriting in which the letters gradually become smaller, cramped and harder to read over time.

One of the more common signs is a decrease in the natural swinging of the arms, most often on one side of the body.

This is a condition in which there is a loss of facial expression. It is also known as “masked face”.

Hypophonia is muffled or low voice volume as a result of lack of coordination in vocal musculature.

Paresthia is the sensation of pricking, tingling or numbness in the skin (i.e. “pins and needles” sensation).

There are also a few non-motor symptoms of Parkinson’s, such as loss of sense of smell (anosmia), excessive sweating of the hands and feet (hyperhidrosis) and memory loss.

Any combination of these secondary symptoms combined with two of the four primary symptoms may aid in confirming a Parkinson’s diagnosis.

To learn more, contact us to find out if you may be showing signs of Parkinson’s.

Parkinson’s Symptoms Have Appeared. What Happens Next?

After the appearance of possible Parkinson’s symptoms, a neurologist will perform a comprehensive physical examination and a thorough uptake of ones medical history, including an account of medications past and present to rule out side effects that may mimic the symptoms of Parkinson’s. Scans may also be used as a diagnostic tool, such as magnetic resonance imaging (MRI) of the brain to rule out a structural cause of Parkinsonism.

In addition to a diagnostic and visual exam, a neurological examination testing agility, muscle tone, gait and balance will be conducted. Results are recorded in a table known as the United Parkinson’s Disease Rating Scale (UPDRS). This universal scale is a vital tool in documenting the progression of the disease and establishing a timeline of symptoms. Comparisons can be made at subsequent follow-up visits.

Clinically, the diagnosis of Parkinson’s is made through the improvement of symptoms after receiving medications that stimulate or imitate the production of the neurotransmitter dopamine, such as levodopa.

Combatting the Disease: What Parkinson’s Treatments are Available

As the majority of Parkinson’s symptoms are a result of a lack of dopamine, many of the Parkinson’s drugs are designed to mimic the effects of dopamine or temporarily replenish the levels of dopamine in the brain. The medications aid in reducing muscle rigidity, lessen tremors and improve speed and coordination. Medication, however, is only one part of the whole treatment plan in combatting Parkinson’s.

Though daily exercising is always good, those who suffer from Parkinson’s use exercise as a vital tool for maintaining balance and mobility. Exercising may also slow the progression of symptoms.

Deep brain stimulation is the most commonly used surgical option for Parkinson’s and is used to treat some of the most debilitating symptoms such as tremors, stiffness and slowed movement. It is an option for those who have exhausted all other possible options in the treatment of symptoms.

During the procedure, a battery-operated medical device known as a neurostimulator is surgically implanted into targeted areas of the brain that control normal movement, delivering electrical stimulation and effectively blocking abnormal nerve signals that cause Parkinson’s tremors and other symptoms. Our neurosurgeons specialize in using frameless techniques for accurate electrode placement using computer-guided navigation.

Deep brain stimulation does not damage healthy brain tissue and is only used for those patients whose symptoms can no longer be controlled with medications.

At IGEA Brain & Spine, our physicians are the leaders in using deep brain stimulation for those affected by Parkinson’s. We work hard to bring comprehensive care and relief for our patients afflicted with this condition.

Though there is no known cure for Parkinson’s disease, IGEA Brain & Spine provides a customized treatment plan to fit individual needs and help to manage even the most severe symptoms. If you or a loved one is suffering from the affects of Parkinson’s, contact us today to learn more about what we can do for you.