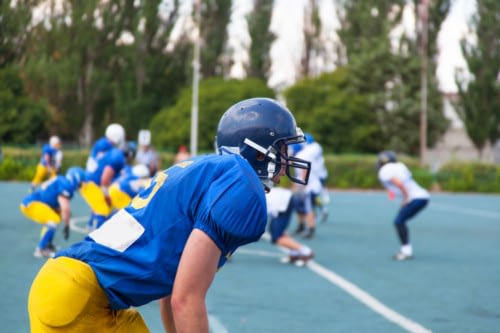 Football takes its toll on the body and often on the parts of the anatomy we treat daily at IGEA Brain & Spine.

Jarvis Landry, a wide receiver for the Miami Dolphins, was fined $24,309 for an illegal hit on safety Aaron Williams of the Buffalo Bills in a game which occurred in October. Landry later apologized, expressing regret that his hit injured Williams. But the money and the apology won’t do Williams a lot of good.

The hit left Williams with a serious—potentially career-ending—neck injury. Williams had previously hurt his neck in the second week of last season during a game against the New England Patriots. Then, like now, he was placed on injured reserve (IR).

Following the first injury, he underwent neck surgery to repair part of his cervical spine. This was followed by a year of rehabilitation to make his way back onto the field. A diagnosis or treatment of his current injury has not been publicized.

According to the British Journal of Sports Medicine, estimated numbers of “sports neck injuries” in the years between 1990 to 1999 rank football at the top with 114,706. In this evaluation, it was deemed that defensive football players, such as Aaron Williams, are particularly prone to these injuries since their position includes more frequent collisions and ones that require more force than in any other sport.

The Fragile Anatomy of the Neck

The neck is part of the spinal column, which extends along most of the length of the body. There are seven bones (C1 to C7 vertebrae) which comprise the cervical spine, located in the neck area. The intervertebral discs in the cervical spine serve as shock absorbers and enable the free movement of the neck.

Sports can cause various injuries to the structure of the neck. These injuries can be categorized as follows:

Obviously, the neck is very vulnerable in a sport like football, especially with high (illegal) hits. As for Jarvis Landry, he admitted that he’s been affected personally by his hit to Williams and that while he won’t change his mentality and his physicality, he will adjust his target area for making contact with players. The game has its risks, he pointed out, and while he claimed he never sets out to deliberately hurt someone, he referenced what we all know about the game: injuries happen.

At IGEA, we are experienced in the diagnosis and treatment of neck and spine conditions, which include cervical conditions and injuries. Our expert neurosurgeons specialize in minimally invasive techniques for fusions, repairs and other procedures, and we pride ourselves on making sure patients are educated and informed about all medical options available to them.