How a Fall – and IGEA Neurosurgeon Ciro Randazzo, MD – Saved My Life 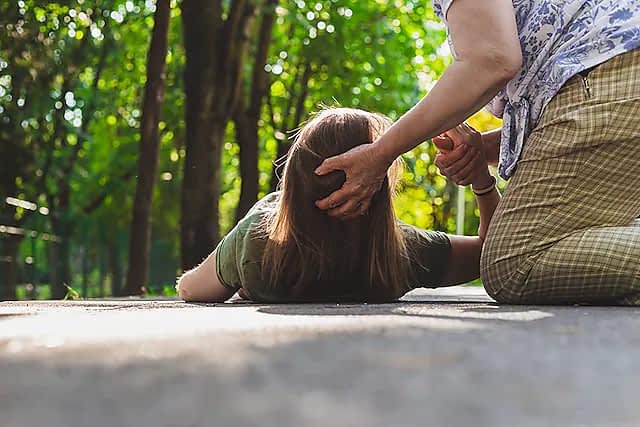 A serious fall and an ambulance ride to the emergency department hardly seem like an auspicious start to a new year, but for Carol Safner, a mishap at the very outset of 2020 proved life-saving.

The Linden resident explains that when her heel got caught on a rug on New Year’s Day, she went crashing to the ground, hitting her head on concrete. She was taken by ambulance to Trinitas Regional Medical Center in Elizabeth. When imaging showed bleeding on the brain, Ms. Safner was transferred to St. Barnabas Medical Center in Livingston. While the intracranial bleeding caused by the fall was quite significant, imaging studies revealed an even greater threat: a large aneurysm on the right side of her head, near the hairline.

“I was shocked to learn about the aneurysm. I have absolutely no medical problems and had no symptoms at all. I did not have any of the headaches, pain, or other issues that some people with brain aneurysms report, although I later learned that most people with unruptured brain aneurysms don’t experience any symptoms,” Ms. Safner says. She also learned something far more disturbing: given the size and other characteristics of her aneurysm, it likely would have ruptured within a few years, potentially killing her.

Upon identifying the aneurysm, Ms. Safner’s physicians called in Ciro G. Randazzo, MD, MPH, FAANS, a neurosurgeon with IGEA Brain, Spine & Orthopedics. Along with his IGEA colleague Anil Nair, MD, FAANS, Dr. Randazzo is among the few neurosurgeons in the country trained in both open neurological surgery and neuroendovascular techniques.

With neuroendovascular procedures, a catheter is inserted into a blood vessel through a small incision in the groin or wrist, just as cardiologists do when performing angiography. In neuroendovascular surgery, those catheters — and tiny devices on even smaller microcatheters within them — are carefully advanced under imaging guidance to the brain, enabling the neurosurgeon to treat an aneurysm, stroke, or other problem. Recovery time for these minimally invasive procedures generally is shorter than for traditional open surgery.

“When performed by a highly experienced neurosurgeon, both open and endovascular procedures to treat brain aneurysms are very safe and have quite favorable outcomes,” Dr. Randazzo explains. He adds, “The advantage of receiving care from a neurosurgeon trained in both approaches is that the surgeon is not limited in the options he or she can offer you. That dual expertise provides a greater ability to individualize care.”

Dr. Randazzo initially favored an endovascular approach for Ms. Safner, but when that proved untenable, he performed open surgery on January 22, 2020.  “Prior to the procedure, I had the opportunity to come to know Ms. Safner and to have extensive discussions with her as we examined the various options. She truly is a lovely person. While she understandably had some anxiety about the news that she had an aneurysm and needed brain surgery, she was a full – and great – partner in the decision-making process and in her care.”

For her part, Ms. Safner says, “I have 100% confidence in Dr. Randazzo. He explained everything that was going to happen, and was with me every step of the way. I think so highly of him that I referred my friend’s husband to him for treatment of hydrocephalus, or water on the brain, and he also had a great experience with Dr. Randazzo.”

Following the successful surgery, Ms. Safner was monitored in the St. Barnabas intensive care unit (ICU) for two days before being discharged home. She then fully recovered from surgery to return to her job as a substance abuse counselor.

“The recovery was not bad. And the surgery wasn’t as bad as I thought it would be. The fear level leading up to the surgery was the worst part of it all,” says Ms. Safner, who credits IGEA Brain, Spine & Orthopedics neuropsychologist Anthony DeMarco, PsyD, ABPP-CN, with working closely with her through the recovery and rehabilitation process.

Dr. Randazzo says, “Our goal at IGEA Brain, Spine & Orthopedics is to provide comprehensive care to patients who have neurologic conditions requiring surgery. Of course, this includes offering them the full range of procedures, which are performed by board-certified, experienced neurosurgeons with considerable expertise in minimally invasive and other cutting-edge techniques. Additionally, however, our comprehensive care often includes the services of Dr. DeMarco, who is an outstanding and board-certified neuropsychologist.”

The neurosurgeon adds that roughly one in 33 middle-aged adults has an intracranial aneurysm. Like  Ms. Safner, most of those people do not experience any symptoms. Further, most have small, stable aneurysms that are at low risk for rupture. In those cases, the aneurysm typically can be monitored with imaging every several months or annually. The patient also should address any health factors that might increase the risk of rupture, such as high blood pressure or smoking.

But when a brain aneurysm at high risk for rupture is identified, a number of surgical options are available, explains Dr. Randazzo, who completed a general surgery internship, five-year neurological surgery residency, and a fellowship in neurovascular surgery, endovascular neurosurgery, and neurological critical care at Thomas Jefferson University Hospital in Philadelphia.

He notes that the traditional surgical approach is craniotomy, an ‘open’ procedure in which a small portion of the skull is temporarily removed so that the surgeon can access the aneurysm and either place a clip around its base or divert blood flow away from it with a vessel bypass. The portion of the skull that was removed to provide access to the aneurysm then is put back in place and secured with plates and screws.

Meanwhile, neuroendovascular techniques for managing brain aneurysms include coiling and flow diversion. With coiling, a microcatheter with platinum coil is inserted through the larger catheter that has been guided to near the aneurysm. The coil then is deployed into the aneurysm, causing clotting and  occluding the aneurysm, preventing blood from reaching it. With flow diversion, the microcatheter places an embolization device across the “neck” of the aneurysm – the point where the bulging aneurysm connects with its “parent” blood vessel. This diverts the flow of blood past the weakened area.

“I always explain to patients that an aneurysm is not a death sentence. We have safe, effective treatments that we can offer people with aneurysms that require surgical intervention, and the research in this area is advancing at a rapid pace,” says Dr. Randazzo.

In addition to performing surgery at certified comprehensive stroke centers including Hackensack University Medical Center in Hackensack, Overlook Medical Center in Summit, St. Joseph’s Regional Medical Center in Paterson, and St. Barnabas Medical Center in Livingston, Dr. Randazzo is active in evaluating outcomes with the latest operative approaches. His research has been published in Stroke, the premier medical journal on cerebrovascular disease, and several other peer-reviewed journals. The neurosurgeon obtained a thorough grounding in clinical study design, epidemiology, and statistical techniques while earning a master’s of public health degree from the University of Medicine and Dentistry of New Jersey (UMDNJ)/Rutgers, which he attended before earning his medical degree from UMDNJ/Robert Wood Johnson Medical School. He also has a bachelor’s degree in biology from Johns Hopkins University. Beyond management of aneurysms, his practice focus encompasses general neurosurgery, neuroendovascular procedures, spinal disease, and cranial and spine tumor surgeries.

To schedule an appointment with Dr. Randazzo or one of the practice’s other physicians, or to learn more about IGEA, call 866-467-1770 or visit https://www.igeaneuro.com/.